According to the Report on Foreign Direct Investment Flows (FDI) of the Central Bank of Honduras (BCH) in the first quarter of 2019, FDI in Honduras totaled US $ 306.5 million, down 3.7% (US $ 11.8 million) compared to the same period of the year Previous, a fact that is explained by lower profits reinvested in various economic activities, highlighting companies in the Manufacturing Industry, Maquila, Mines and Quarries. Likewise, there was a decrease in the registration of new capital contributions in established companies.

In the first three months of 2019, preliminary information shows that companies with direct foreign participation reinvested US $ 178.9 million (58.4% of total FDI), an amount less than US $ 28.8 million (13.9%) as reported in the same quarter of the year previous. The primary factor that caused such behavior was a reduction in profits by subsidiaries and associates of multinationals, highlighting those dedicated to manufacturing; nevertheless, this trend was partially attenuated by the positive results in the income received by the institutions of the Financial Sector with foreign participation.

North America was the main region that generated FDI flows to the country, reaching a 40.1% share of the total (equivalent to US $ 122.9 million). These resources come mostly from the US with US $ 91.7 million, reporting a growth of US $ 64.4 million in year-on-year terms, as a result of the increase in loans granted to Maquila companies for the acquisition of inputs for the production of textiles and the like.

In order of participation, secondly, the capitals originating from the Rest of America (25.4% of the total) are located, with an amount of US $ 77.9 million, reflecting an increase of US $ 7.9 million; highlighting the reinvestment of profits of Colombian control financial companies. From countries in Europe, investments for US $ 64.4 million (21.0% of the total) were recorded, showing a drop of US $ 40.1 million compared to what was presented in March 2018; result – mostly – of the amortization of debts of companies of the Manufacturing Industry to their parent companies in Switzerland and Germany, mainly those dedicated to the coffee beneficiary.

In Central America, FDI income of US $ 21.2 million was received, with a decrease of US $ 31.0 million compared to that recorded during the first quarter of 2018, due, in part, to the lower investment in Shares and Participations of institutions of the Financial System , and net losses in subsidiaries dedicated to Commerce and Hotels and Restaurants. 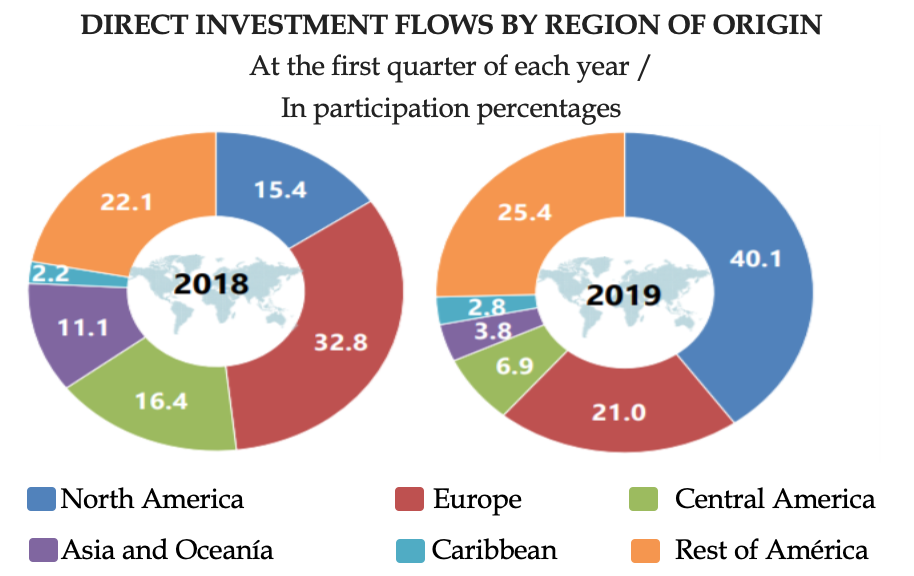